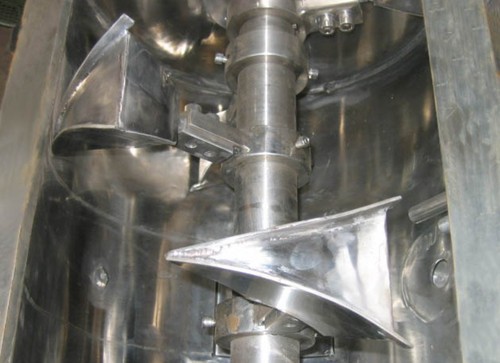 In operation, material is loaded through the top inlet. The working volume of the plough shear mixer ranges from 30% to 60% of the plow tooltotal drum volume. The shaft rotates at higher speed, producing a plough tip speed of more than 200 meters per minute to effect a fluidizing action. The ploughs throw the material upward, and the material settles in a random pattern. The size, shape, positioning, and peripheral speed of the ploughs are coordinated in such a way that they produce a whirling, three-dimensional product movement. The turbulence and material movement within the mixer container prevents formation of dead-spots or low-movement zones and ensures fast and homogenous mixing. The ploughs are designed to lift the material from the inside wall of the container without squashing the particles against the wall

Considering product density, volume and moisture content, we will design the drive unit for each application individually. Specifying the right drive requires effective communication between the equipment manufacturer and buyer to identify key process needs.

According to different processed materials, plow shapes and arrangement could be tailor designed.

The batch plough shear mixer is the most versatile mixer type available with an extensive range of applications:

Plough Shear Mixer has applications in the following industries:

Get in Touch with ABF